A root barrier, also known as a vertical cut off wall or root guard is typically plastic membranes that redirect tree roots down and away from hardscapes, preventing costly root damage while preserving the health and beauty of mature trees. As well as being impervious to root growth they also act as moisture barriers.  For footing protection of buildings, a root barrier simultaneously prevents root ingress while allowing rehydration of tree root moisture depleted soils in the vicinity of a building’s footings, stabilizing any footing movement. These deep root barriers are installed typically to a depth of 2.0 m.

Shallower root barriers of 600 mm to 1.2 m depth are used to protect landscape assets, paving, pipes, sewer, and garden beds from tree roots. They are also very effective in preventing the spread of invasive running Bamboos. 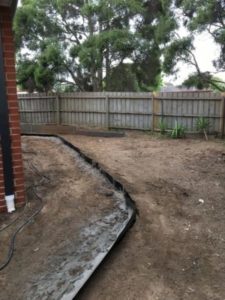 Root barrier for new residential development before being cut to ground level. 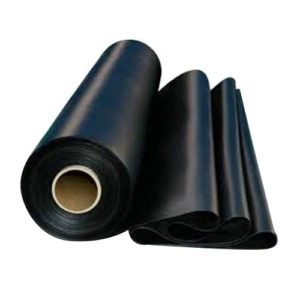 There are a lot of misconceptions about the way and where tree roots grow.  A commonly held belief is that they grow as deep within the soil profile as they are tall and that roots tend to extend only to the tree’s drip line. This is not the case. Tree roots vary in size from large woody roots of 30 cm diameter or more to fine woody roots less than 2 mm in diameter.

Usually, a number of major woody roots originate from the root collar just below the ground of most trees and grow horizontally through the soil.  This branch and decrease in diameter with increasing distance from the trunk. In typical clay loam soils, these are usually confined to within the top 30 to 60 cm centimeters below the surface, where at greater depths there are low oxygen levels unable to support root growth and function. Roots growing within well-aerated loam and sandy soils can achieve depths of  1.0 to 2.0 m, with most roots within the upper levels of the soil profile. Some roots known as ‘sinker’ roots in some species such as Eucalyptus, can penetrate to a far greater depth of several meters under certain conditions.

A complex system of small roots grows outward and then usually upward from these woody roots. They typically branch four or more times to form a mass of thousands of fine short non-woody roots, many not easily visible to the eye. These finer ‘feeder’ roots make up the vast majority of trees roots and the primary sites of absorption of water and minerals.

Tree’s and their roots close to buildings are frequently blamed for footing movement causing cracking in the brickwork, uneven floors, misalignment of doors and windows, and cracking within the internal walls as well. They may also cause the cracking and movement of both stormwater and sewer pipes.

Trees can be likened to water pumps, driven by the process of photosynthesis and transpiration, and are able to remove substantial quantities of moisture via their roots. This change in soil moisture levels particularly on clay soils, amplified by the drying effect of the tree beyond naturally occurring seasonal variation through rain, causes drying of the foundation (soil) which may consequently shrink. This shrinkage can cause the clay around the footing to move and the footing to drop.   This process is often referred to as drying settlement.

Trees positioned near houses that are suffering footing distress are almost invariably blamed, however, they may only be part of the problem. Other factors to consider are: –

The zone of drying influence will increase if several trees are involved such as with a hedgerow. Another indicator is whether the extent and size of cracking or wall movement increases over the summer months, indicating the cracking is due to differential changes in soil moisture.  The pattern of cracking indicates the dynamics of the footing movement. 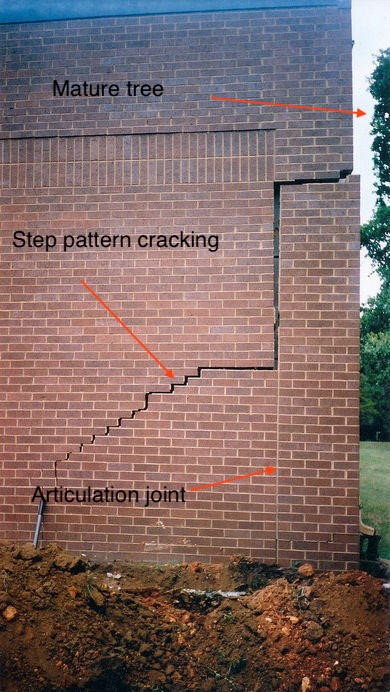 Tree causing drying settlement. The step cracking pattern indicates the subsidence of the footing along the corner area of the building.

Blocked stormwater pipes and leaking gutters will discharge large quantities of water adjacent to just one area of the footing. The greater differential wetting (wet subsoil on the outside of the wall and markedly drier under the house) can cause deformations and swell due to moisture differences in the footings vicinity). In extreme instances, on clay soils, excessive water discharge adjacent to a footing can cause the ‘liquefaction’ of the clay which becomes so wet that it loses its structural integrity and is unable to support the weight of the footing and structure. This is why maintaining one’s roof gutters and having un-blocked stormwater pipes is very important.

In some instances, footing issues are related to a lack of site preparation prior to the build. If the soil was not adequately compacted and the house constructed on fill, the foundations (the soil supporting the footing) may not provide adequate footing support. Prior to the construction of a new dwelling on a site with an existing structure, several months preferably over autumn, winter, and spring are required following demolition to allow for adequate rehydration of the soil over the area covered by the previous structure. If the site resting period is not adequate, then the new structure may be built on soils with an uneven moisture gradient which can cause footing movement.

If all other potential causes of footing distress have been eliminated and/or there is a sizeable tree in close proximity to the area of damage, then a deep root control barrier will eliminate the drying effects of the tree on the footings.  Root barriers are made out of a number of different materials though  HDPE High-density poly-ethylene plastic is the most common.  It is impervious to roots and also acts as a moisture barrier.  The waterproof root barrier will allow for soils between the house and membrane to rehydrate during autumn, winter, and spring. This will in many instances see the closure of cracks attributable to drying settlement.

As a rough rule of thumb, the maximum lateral reach of the drying influence for a single tree under consideration should be taken as 1.0 times the anticipated mature height of the tree (AS 2870- 2011 Residential Slabs and Footings).

Root barriers for footing protection for a single existing established large tree usually don’t exceed 24 m although lengths in the vicinity of 10 to 20 m are more common.

They are placed, far enough away so as not to affect the health of the tree and closer to the house or asset being protected.  In many instances, due to site limitations, the root barrier may need to be installed well within the TPZ Trees protection zone.

Prior to installing root barriers, we fully assess the health of the tree, measure its size, specifically the trunk diameter, and whether there are existing encroachments which may affect the direction and pattern of root growth. Using this information, we can determine the minimum reasonable set back of the root barrier from the tree to ensure it will not be harmed by the installation.

We use one or several of the following methods depending on each situation:

We tailor the method based on the type and arrangement of underground services, whether services are single or grouped together, and on the backfill material to be used.

Each root barrier is quoted, with the pricing based on considerations of the length and depth of the root barrier, the soil type, the amount of root pruning required, the number of intercepting underground services, access, type of backfill, and the finish required.

A majority of root barrier installations fully installed for residential sites fall in the range of $1,800 to $12,000 incl GST

For worthwhile trees, alternatives to root barriers include selective root pruning, footing underpinning, or ground injections of structural geopolymers that have the effect of filling voids in the soil and provide an uplift of beneath an existing footing.  In some instances, the removal of the tree may be the only option.

Sound planning, advice and the effective implementation of tree management strategies coupled with tools such as Hydro excavation allows for the best possible outcomes for preserving significant trees on development sites while achieving development goals.